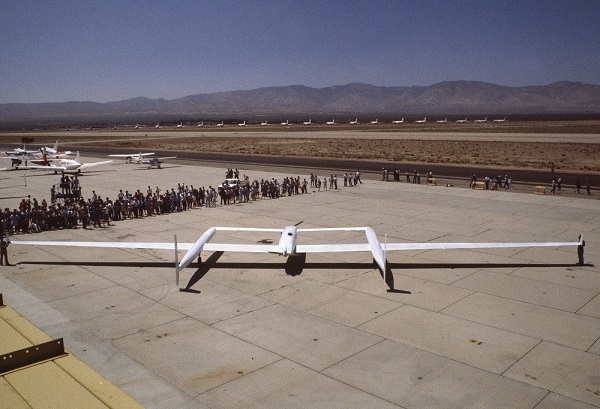 All of us have seen aeronautical wonders during our lifetimes, especially in the 20th century.  But few if any can compare to the flight of the Voyager in December of 1986.  Voyager was the first airplane flight around the world, non-stop, with no refueling.  Although almost 40 years have passed since then, and the flight has been almost completely forgotten, the Voyager flight was a monumental achievement.  It really was a flight “on a wing and a prayer”.

nautical inventors and engineers, Jeana Yeager, Dick Rutan and Burt Rutan, the owner of the Rutan Aircraft Factory, one of the most innovative aircraft companies in the last 50 years.  The plane was basically a very long narrow glider-style wing, with a central fuselage which housed all controls and two pilots.  There were also two side or boom fuselages (like a P-39 Lightning).  Twin rudders were mounted on the back of these side booms.  The plane was 111 feet wide, 29 feet long and 10 feet high.  It was powered by two inline engines, a traditional Teledyne Continental 130 HP nose engine, and a non-traditional rear Teledyne Continental 110 HP pusher engine.

Construction was mostly out of very light fiberglass, carbon fiber, and Kevlar, and the empty weight was only 2250 lb.  Obviously, this aircraft was not designed for any normal in-flight stresses.  It was specifically designed to simply fly around the world while avoiding any weather that would stress the airframe.  Once fully loaded with two pilots, their food supply, water and gas, the take-off weight was 9,694.5 lbs.  That means the gross weight was 4.3 times the empty weight---virtually unheard of in aircraft design.

It is impossible to overstate the sheer bravery of the two pilots, Jeana Yeager and Dick Rutan, and they were very well aware of the dangers.  First of all, the airframe could most accurately be described as flimsy.   On take-off for the record flight, the plane was a virtual flying gas tank.  If it had crashed on take-off, it was going to be a raging inferno.  As with any around-the-world flight, they would be flying mostly over open ocean, and when they were over land, usually they would be far from airports, and almost always far away from any available help.  If the plane had failed at any point, it would mean almost certain death for both of them.  And there would be a serious fatigue factor, with one pilot flying and one resting at all times.  The central fuselage was extremely small and cramped for them, like two people living in a phone booth.  It was really a challenge both to their flying skills and to their physical endurance and mental stamina.  Truly, their odds of surviving this flight were probably less than 50%.

The flight started at 8 AM on December 14, 1986, from Edwards Air Force Base in southern California.  The runway there is 15,000 feet or almost three miles.  Voyager was full to almost overflowing with gas, and at full gross weight.  On the take-off run, Voyager took up 14,200 feet or just 800 feet from the end of the runway.  But this was also just 800 feet away from a disastrous crash.  Finally, Voyager got airborne.  On the take-off run, the wing was so loaded down with fuel that the wing tips were dragging on the runway, and this damaged the wingtips, but not enough to cancel the flight.  The take-off came very close to failing.

Once airborne, and with both engines working at between 75%  and max output, pilot Dick Rutan turned the aircraft west and started the long flight across the Pacific One of their first complications was dodging Typhoon Marge, which added 600 miles to the flight.  By pre-design, after about four days of flight, enough fuel had been burned off that the front engine could be shut off, and the rest of the voyage was completed with just the rear 110 HP pusher engine.  This historic flight lasted for 9 days and almost 4 minutes.  It covered 26,366 statute miles at an average height of 11,000 feet and an average speed of only 116 MPH.  Finally on December 23, 1986, and again at roughly 8 AM, the Voyager approached Edwards Air Force Base from the east.  Dick Rutan was again at the controls and made three slow passes over the field before landing.  Once on the ground, they checked the gas tanks and found only about 21 gallons of fuel left, i.e. they were almost out of gas.  That was an extremely small margin for error.

From all the above, you can see why we refer to this around-the-world flight as being “on a wing and a prayer.”

This flight would not have been possible at all except for a large support staff of around 100 people.  They performed functions like worldwide communication, airspace clearances and overflight permission, worldwide weather tracking, navigation, public information and media coverage, and countless other duties.

The flight of the Voyager was one of the most monumental flights in history.  Jeana Yeager, Dick Rutan, and designer Burt Rutan all received quick recognition.  They all received the Robert J. Collier Trophy, an annual US award for great achievements in aeronautics.  And just four days after their return to Edwards Air Force Base, President Ronald Reagan had all three of them at the White House where he awarded the three of them the Presidential Citizenship Medal.  Only 16 of those medals had previously been awarded in US history.  What can we say?  If anyone deserved it, Jeana, Dick and Burt certainly did.