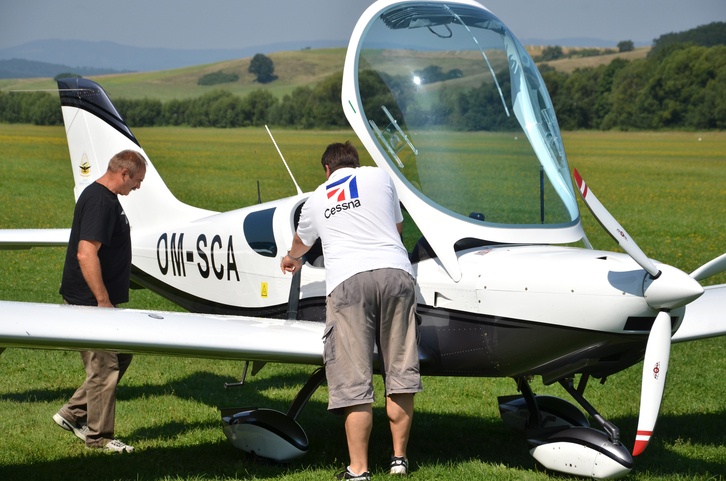 As we enter flight school and start out as new private pilots, we are all taught the routine of preflight inspections and how important they are.  We are hopefully also taught to be very thorough.  The preflight is almost as important as the flying itself.  Read on to learn why.  We will follow up with one example of how badly things can go wrong if you don’t check everything, or if you “cut corners”.

We have all learned the routine for preflight, but it should never get routine, even though we are tempted to become blasé’ about it.  That temptation has to be resisted.  The inspection usually starts at one of the cabin doors, and goes around the aircraft in either clockwise or counterclockwise, checking flight controls surfaces, gas tank levels, stall warning, wheels, skin condition, lights, engine and engine oil, and many other items.  In fact, there are so many items, it is best to use a checklist, although the truth is that few of us use a list.  But remember, one of the reasons that flying is so safe, especially airline flying, is that the airlines use checklists all the time.  In fact, airlines are the safest industry in the United States and worldwide, and one of the biggest reasons why is that the airlines use checklists for almost all of their preflight and flight operations.  So make sure your preflight inspection is thorough. Don’t leave anything out.  And again, don’t fall into a “routine”, or let the inspection become a process of just “going through the motions”.  In other words, check your “attitude” about the whole process

Although we almost never hear about an aircraft accident being caused by a faulty or incomplete preflight, believe us, it happens.  To illustrate the point, we want to introduce you to a really good young man, Brook Berringer.

Brook was, by all accounts, a real good and decent young man.  He had been an outstanding high school athlete, especially in football.  In the mid-1990s he was the second string quarterback for the famed University of Nebraska Huskers football team.  When the first string quarterback was out with injuries, Brook stepped in and was very instrumental helping Nebraska capture the national NCAA football championship in both 1994 and 1995.  He was engaged and he and his fiancé had a young child.  He graduated from Nebraska in 1995.  His life was headed in all the right directions.

There had been several pilots in his family, and Brook naturally picked up a love of flying, and by early 1996, he had a private pilot’s license, and had built up 125 hours of flight time.  So he had a fair amount of experience.  A friend of his in Lincoln, Nebraska owned a vintage yellow 1946 Piper J-3 Cub, one of the most classic airplanes in the United States.  His friend let Brook fly this Cub any time he wanted to, so on Thursday April 18, 1996 Brook and his soon to be brother-in-saw, Tobey, also an experienced pilot (commercial rating with 210 hours), decided to take the Cub out for a spin.  Brook was the pilot in the back seat, with Tobey was the passenger in the front seat, so the Cub was close to maximum weight.  They did a pre-flight on the Cub, taxied out, did a run up, and then took off.  This was from a rural private sod airstrip, surrounded by flat cropland.

Things went just fine until they got to 250 feet up, at which time the 65 horsepower Lycoming engine simply quit.  With the plane fully loaded with passengers and fuel, and at that low altitude, experienced flyers would agree that the best procedure would be to get that nose down, maintain airspeed, and land the best place you can, basically straight ahead.  And as we all know, in these circumstances, there is a very strong psychological temptation to try to “get back to the airport”, a temptation that has to be resisted at such a low altitude.  Unfortunately, Brook tried to turn back, and since it was windy that day (20-30 MPH and gusty), and with the Cub fully loaded, the Cub stalled, and went straight into the ground.  Both Brook and Tobey were killed and the plane was completely destroyed.

As always, the National Transportation Safety Board (NTSB) was called in to investigate.  There were at least two eyewitnesses.  It took investigators only 9 months to reach their conclusions---fairly fast for the NTSB.  They found the fuel valve for the J-3 Cub was not fully on, but only about 2/3rds or 3/4ths on.  So on taxi and run up, and initially during take-off, the engine was getting enough gas.  But with full throttle on take-off, and with the valve only partially open, the gas feed could not keep up with the high consumption, and the engine failed due to that classic old cause, “fuel starvation”.  The secondary causes were “failure to maintain control of the aircraft” (probably meaning his decision to turn back), and the high winds.

In addition to the lost lives, the crash left Brook’s widow and one orphan.  This is all very tragic.  Of course all the Nebraska football staff and fans were stunned.  Brook had a promising life ahead.  Just two days later, on the following Saturday April 20, the NLF was holding its 1996 draft.  Given all his talent, Brook was expected to be drafted as a pro quarterback.  It never happened.